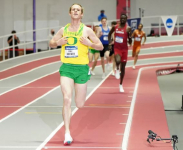 “I definitely feel like I’m in the best shape of my life. Better than three weeks ago when we ran 3:50,” he said, referring to his Feb. 12 Mile time, #2 collegian all-time.

The Oregon sophomore from Indianapolis ran himself onto a list of track & field legends Saturday in the NCAA Indoor Championships at Fayetteville, Ark. He set a meet record in the Mile and near-record in the 3000 meters, helping the Ducks to a resounding team title.

Oregon scored 79 points, second only to Arkansas’ record 94 from 1994. Indiana tied for 22nd with nine points.

Hocker, 19, became the youngest American ever to win the Mile and youngest of any nation to win such a distance double at indoor NCAAs. He has become a contender to make the Tokyo team at June's Olympic Trials, held on Oregon's track.

Oregon coaches pondered pulling Hocker out of the 3000, which began 55 minutes after the Mile. Unsure if the Ducks needed the points, he stayed in it.