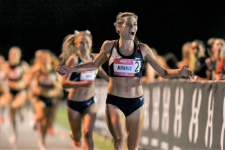 "To bounce back after a disappointing Trials is just a testament to who she is and how much he loves the sport.”

Almost a month after finishing eighth in the 5000 meters at the U.S. Olympic Track & Field Trials, Josette Norris raced on the track again—and she ran like she had nothing to lose and everything to gain.

On Sunday, July 18, the Reebok Boston Track Club runner positioned herself within striking distance of the leaders during the early stages of the women’s 1500 meters at the Sound Running Sunset Tour in Mission Viejo, California. When she approached the bell lap and saw the clock, she remembered her coach Chris Fox’s pre-race instruction: “​​If you see 2:58 with a lap to go, go for [sub-4 minutes].”

So Norris put her head down and did exactly that.

Heading into the final 200 meters of the race, Norris passed race leader Jessica Hull and switched gears, running a closing pace (60.9 seconds for the last lap) Hull could not match. As she crossed the finish line, Norris’s huge smile said it all. Her winning time of 3:59.72—which puts her at #9 on the U.S. all-time performer list, and is nearly a seven-second improvement on her previous best—was the affirmation she wanted after Trials.

“I needed this coming off the Trials,” Norris, 25, told Runner’s World at the Trabuco Hills High School track. “This shows me that everything is in the right direction. I’m ecstatic!”

After her victory, Norris shared how she returned from the setback faster than ever by trusting her training, focusing on long-term goals, and listening to the advice of her fiancé, Olympian Robby Andrews—who congratulated Norris with a hug at the finish line.

The COVID-adjusted season was a pivotal time for Norris, whose goal one year ago was to simply make the 5000m final of the Olympic Trials. After navigating several injuries during her college career at the University of North Carolina and Georgetown—including rolling her ankle and getting attacked by a dog that led to compensation issues and a stress reaction in her femur—Norris finally hit her stride during her fifth year with a fourth-place finish in the 5000 meters at the 2019 NCAA Outdoor Championships.

Less than a year after signing her first pro contract with Reebok, the pandemic hit and caused most major sports events—including the Tokyo Games—to be postponed. The delay proved beneficial for the Charlottesville, Virginia-based runner, who seized the opportunity to build more strength so she could handle the rigors of pro-level training.