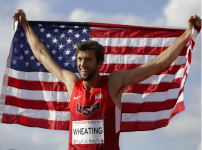 Wheating’s gold medal is his first as both a professional and a member of the Team USA. He was crowned NCAA champion when he posted a time of 3 minutes, 47.94 seconds in the 1500 for the Ducks in 2010.