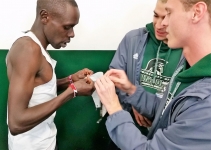 WINSTON-SALEM — Add UNC-Greensboro alumnus Paul Chelimo to the list of American runners to break 4 minutes in the Mile.

And he did it close to his second home.

On Saturday afternoon, Chelimo, a 2016 Rio Olympic silver medalist who earned multiple All-American honors for the Spartans, turned in a 3:58.59 at JDL Fast Track in his second race of the day, finishing second in the Camel City Elite Mile behind 17-time NCAA champion Edward Cheserek and his facility and state record 3:53.85 (and world leading time).

Pfafftown's Craig Engels, a Reagan High School graduate who runs with the Nike Oregon Project, finished fourth in the Mile but cranked out a sub-4 minute Mile for the second straight weekend, running a 3:58.81. Engels, who began his college career at NC State and finished at Mississippi, ran a 3:57.35 last Saturday at the Dr. Sander Invitational at the Armory in New York.