Home to the 1996 Atlanta Olympics, the Peachtree State witnessed Mile legend Noureddine Morceli's 3:50.86 warm-up prior to the Games at the Atlanta Grand Prix, a U.S. All-Comer's Mile record at the time. More recently, in 2015, Brandon Lasaster became the first native Georgian to go sub-4 minutes, while Amanda Winslow, a standout at Collins Hill High School and Florida State, has a sub-4:30 Mile to her name, recorded in 2014; see the below. 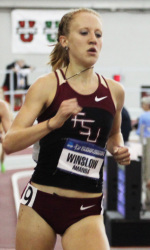 Amanda Winslow became the fastest Georgian woman with her 4:31.08 runner-up finish at the 2013 NCAA Indoor Championships, and in 2014, she clocked a sub-4:30 indoor Mile.

JOIN BBTM
BBTM’s state-by-state Mile guide is being produced to share the rich story of each state’s history with the Mile, a distance regardless of age, gender or fitness-level, that everyone understands. If you consider yourself a Georgian T&F sage and would like to help us fill out our guide, email milemaniac@bringbackthemile.com. We welcome your support and feedback!