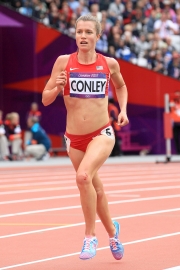 She earned a spot on the 2012 U.S. Olympic team with a thrilling third place finish in the the 5000 meters, London Games "A" standard performance in Eugene, Oregon, and also secured her second Team USA Olympic berth in 2016, again in the 5000m.

Montgomery grad Kim Conley proving she can go any distance

Kim Conley has made herself into quite a distance runner — defined, in this case, as someone who can win a race at practically any distance.

Most of us know Conley as the local product...

NEW YORK -- Here at the 19th New Balance Games, an afternoon of fast times and close races brought fans to their feet at The New Balance Track & Field Center at...