Laura Muir full of confidence ahead of historic World Championships 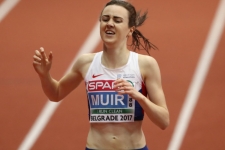 “When it comes to London I’m just going to run as hard and as fast as I can and hopefully that will bring me a world medal.”

By Duncan Smith, The Scotsman

In an event which will see the last track appearances of megastars Usain Bolt and Sir Mo Farah, Scotland’s Laura Muir is understandably not quite top of the bill, but she’s not far short of it.

Ahead of next month’s IAAF World Championships, the rising star of British athletics has joined the same sports management agency as Jessica Ennis-Hill and she is shaping up to be a “Face of the Games” just as much as the legendary heptathlete was in the same London Olympic Stadium five years ago.

The 24-year-old from Milnathort is targeting the 1500m / 5000m double and if she can achieve her first major outdoor medals, ideally gold, it would go down as one of the great achievements in Scottish athletics history.

After a few years of growing incremental promise, the runner, who juggles her burgeoning athletics career with a degree in veterinary medicine at the University of Glasgow, made her breakthrough earlier this year with 1500m and 3000m golds at the European Indoor Championships in Belgrade.

A foot injury threatened her attempt at the historic Worlds double but she is back to full fitness, performing well and brimming with confidence ahead of the global championships.