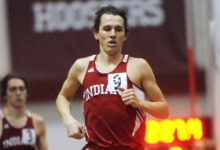 By Brett Hess, The News-Sentinel

Andy Bayer is officially a Nike-sponsored athlete. The 2008 Leo graduate and NCAA champion for Indiana University has signed a contract with the shoemaker and will begin his professional running career next month after moving to Portland, Ore.

Blanchard also ran for the Hoosiers. After the wedding, the Bayers will move to Oregon where Andy will train with other elite middle-distance runners.

The move to professional running wasn't even a dream for Bayer when he walked on to the Indiana University cross country team in the fall of 2008.

Although he had won the IHSAA championship in the 3200 meter run and had earned all-state honors in cross country, it was a leap into the unknown.