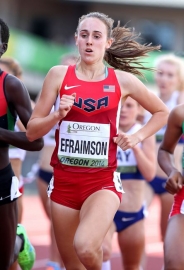 At the Palio della Quercia meet in Rovereto, Italy on September 6, 2016, she shattered the U.S. Junior outdoor Mile record (19 & under), clocking 4:27.39 to finish third overall against an international field. Efraimson was also the second U.S. female high school distance runner to turn pro before graduating within the last three years, after New York's phenom Mary Cain.

After signing a contract with Nike in 2014, she continues to work with her high school coach Michael Hickey, forgoing her final year of high school and collegiate racing eligibility. With her 4:03.39 at the 2015 Prefontaine Classic, Alexa broke Mary Cain's national junior and high school records continuing her progression as a rising Mile star.

At the age of 16 she won the U.S. Junior 1500m title, and joined Jordan Hasay as the only boy or girl to win a distance medal at the World Youth Championships with a bronze in 2013.

The men's Mile and women's 1500 meters are set to feature some of the top runners in the world as part of the Drake...

Genzebe Dibaba grabbed the headlines at the Palio della Quercia meeting in Rovereto, Italy after recording...

Alexa Efraimson: The Teen Miler to Watch at USATF Championships

Eighteen-year-old pro is a contender for World Championships 1500 meter team.

A teen who turned pro while in high school might make the U.S. 1500 meter team for August’s World Championships in Beijing. But if it happens, the odds are that it will be...

Breakthrough at Pre Classic highlight of year marked by growth

By Micah Rice, The Columbian

On a recent rainy afternoon, one of the hottest young names in American running blazed around the Hudson's Bay High School track.

As Alexa Efraimson's eyes locked onto the finish line ahead, each...

Alexa Efraimson, the Nike Cross Nationals and USA Junior 1500 meter champion from Camas, Washington, has signed a professional contract with...

Moments after running a sensational 4:07.05 in the women’s professional 1500m field on Saturday at the adidas Grand Prix in New York, Alexa Efraimson, who is finishing...

NEW YORK -- The third and final day of New Balance Indoor Nationals came to a close here today, with one meet record falling in the distance disciplines. Camas, Wash.,...

Just as we were starting to get excited to see what Alexa Efraimson could possibly do to top her historic first three years of high school,...

NEW YORK -  Elise Cranny and Alexa Efraimson will go head to head at the adidas Grand Prix on June 14 in the biggest matchup the adidas Girls’ Dream Mile has seen since it began in 2010, organizers have announced.

Alexa Efraimson: The Next Big Thing

"The Mile is the ultimate race because it is a combination of strength, endurance, power and speed."

As part of our coverage of the adidas Golden Stripes Tour, Alexa Efraimson was visited for a video feature in the early stages of her junior season of outdoor track...

Anyone who watched Mary Cain win the New Balance 1000m in Boston last Saturday has to wonder what Alexa Efraimson was thinking about that performance. Efraimson will be making...