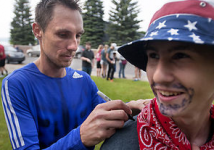 "They came to run tonight. It's something they will talk about for the rest of their lives, too: the time they got to go and beat an Olympic medalist."

For Noah Robotham, Max Okros, Joey Johnston and Jeffrey Crouch, Monday was a day none of the four is soon to forget.

It was the day they teamed up to beat an Olympian.

"I thought we would be a little bit behind him, like probably five or 10 seconds behind him," said Robotham. "He was about five to 10 meters ahead of me (when I got the handoff). Just seeing him running right there I was thinking, 'O.K., I can get him,' and I just went for it."

The event, which helped raise money for improvements to the track at Benzie Central High School, featured Willis running the Mile against 15 4x400-meter relay teams who entered. Robotham, the anchor leg for his team — dubbed the Bearded Warriors —  used that late push to surge past Willis near the end of the race to finish first in a time of 3 minutes, 56 seconds. Willis, who has a personal record time of 3:49 in the Mile and was the silver medalist at the 2008 Summer Olympics in Beijing, finished in 3:58.