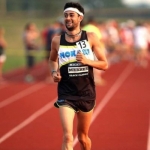 Throughout the long and glorious history of track & field in the United States, there have been many accomplished athletes who have gone on to serve the sport as coaches, administrators, agents or event promoters. Middle distance runner Kyle Merber could have waited until he hung up his spikes to create an all-inclusive event to promote his sport – but he didn’t.

A 25-year-old resident of Clinton, New Jersey, Merber is recognized as a talented runner specializing in the Mile and 1500 meters, whose love affair with track & field began years ago.

“I started when I was really young, which I know is rare for most people,” Merber said. “Originally, I’m from Long Island, and in 1996 after Derrick Adkins won the gold medal (400m hurdles), he came back to his elementary school -- which happened to be my elementary school -- and appeared at an assembly to speak about his Olympic experience. He had really great things to say. I immediately went home and told my mom about it, and shortly thereafter I competed in my first track meet.”