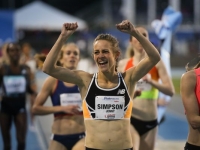 Simpson won a gold medal at the 2011 World Championships: “What that shifted for me is, I believed I could win any race ever. I have the medal to go home to, to remind myself that you don’t have to have a perfect season to win at the world level."

If the United States’ Olympic medal drought in the women’s 1500 meters is ever going to end, this is the year.

And Jenny Simpson, a Webster City native and two-time Olympian, is the best bet.

“As far as having goals and establishing a career and a legacy,” Simpson said Friday after winning her fourth Drake Relays metric Mile title, “(The Olympics) is not a box to check off, this is the box to check off.”

Simpson was making her 2016 debut in Des Moines, and used a blistering kick down the straightaway to pull away from her rivals.