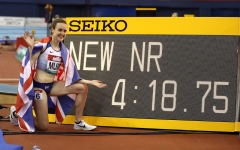 "I was no prodigial youngster... running was a hobby and it went from there."

By Tom Morgan, The Telegraph sports

As a schoolgirl, Dina Asher-Smith was so close to the action during British athletics' 2012 golden hour she could reach out and touch her heroes. Laura Muir, in contrast, spent "Super Saturday" milking cows in Perth.

The Olympic stadium kit carrier and the then wannabe vet now stand shoulder-to-shoulder, along with Katarina Johnson-Thompson, as Britain's best chance of emulating Jessica Ennis-Hill, Greg Rutherford and Mo Farah in Tokyo, Japan next year.

Unlike Asher-Smith, already breaking world records for her age group by 2012, this was never the plan for Muir, whose middle-distance rise to stardom has come via a sprint.

"I was no prodigial youngster," said the 25-year-old. "I didn't want to be an athlete. I enjoyed running as a hobby and it just went from there. I realized I was pretty good at it when I was 20. I went to university at 18 and it was only a couple of years after that I made a really big jump, went to the world juniors and went, up, up."

That "up, up" trajectory has continued over five years and is now on the way, according to British Athletics performance director Neil Black, to becoming a “phenomenon”. Current IAAF President Sebastian Coe, who won Olympic 1500m titles in 1980 and 1984 for Great Britain, believes there is “absolutely no question” she can win Olympic gold next year.

At the European Indoor Championships in Glasgow in March, Muir destroyed her rivals to add the 1500m title on Sunday to her 3000m win two days earlier, thereby repeating her success from Belgrade two years ago. Next in her sights is the World Championships in Doha this September.