The raw genius that was ace Miler ASM Khan 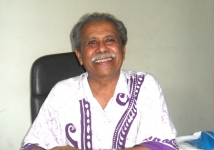 By Sa’adi Thawfeeq, The Nation

He was dubbed the ‘Smiling Miler’ by the local press because he always finished a race with a smile on his face, called the ‘Wonder Boy of Ceylon’ in India and also referred to as the ‘Local Zatopek of Asia’ and the ‘Iron Athlete of Ceylon’.Such names were coined to describe the extraordinary running talents of Ahmed Sher Mohamed Khan, more famously known as ASM Khan as he bestrode the local and Asian athletic world like a colossus taking everything before him in an era where sportsmen and women took part for glory and pride.

It was an age when sports athletes were pure and untouched and not drawn by the lure for money which according to Khan has made today’s athletes resort to all types of cheating not only to hog the limelight but also to fatten their purses. Khan, a middle and long distance athlete ran for the pleasure of taking part in competition and to be with the best. Unfortunately for an athlete of his talent and calibre his participation was restricted only to Sri Lanka and Asian countries like India, Malaysia and Indonesia. He said that he was denied the opportunity of taking part in the Olympic Games or the Empire Games by the Amateur Athletic Association (AAA) and the National Olympic Committee (NOC) of that time.

“I know it was difficult to beat the world record but I had the determination to run with world class athletes but the AAA and the NOC they never gave me a chance to prove myself on the world stage,” lamented Khan. “I was selected seed #1 out of nine athletes, but instead of me the rest went to the 1960 Olympics in Rome. My place was given to a gymnast by the name of VA Sugathadasa who was later to become the first Sports Minister. They didn’t have the courtesy to even inform me that I was not picked.”