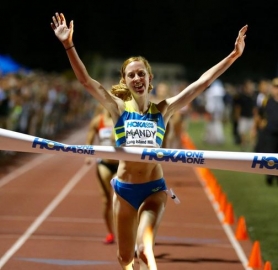 Amanda Eccleston won the 2021 HOKA Festival of Miles race in St. Louis, breaking the beam in 4:30.06, a meet record, and in her last race as a professional, Eccleston finished 11th at the Sir Walter Miler (4:30.72) this past August.

In 2016, Eccleston finished 4th at the U.S. Olympic Trials 1500 meters, just missing a Team USA Rio Olympics berth by .03 to Brenda Martinez, 4:06.16 to 4:06.19. In August, Eccleston defended her HOKA ONE ONE Long Island Mile title, breaking the beam in a race record 4:26.87, her fourth sub-4:30 of the year! Also earlier in the year, she had an impressivee third place finish at the indoor Wanamaker Mile, part of the 109th Millrose Games, clocking a then personal record 4:26.63 to become the 9th fastest American woman in the indoor Mile all-time to-date.

She competed for the University of Michigan for one year after transfering from Division II school Hillsdale College. Post-collegiately Eccleston, who was a two-time All-American at Michigan, made her first national final finishing 10th in the 1500m at 2014 USA Outdoor Championships.

Eccleston, McDonald Triumph at HOKA ONE ONE Long Island Mile

LONG ISLAND, N.Y. – A lively crowd, competitive fields and near perfect race conditions led to exhilarating finishes Wednesday evening at the HOKA ONE ONE Long Island Mile as Amanda...

Amanda Eccleston had never run the Minnesota Mile before, but she received a valuable piece of...

Three Races That Have Shaped My Running Career

These three races don’t stand out as physical accomplishments; instead they each reflect a mental breakthrough and turning point.

Every so often a race leaves a lasting impact on you that’s far more than just a good time or a nice win. Over the past 14 years of my running...

Are you ready? The HOKA ONE ONE Long Island Mile hits the track next week on Wednesday, August 31, 2016. In its debut, last year’s event saw 7...

But 0.03 seconds doesn’t have to define me. The joy I receive through running and the people involved far outweighs that fraction of a second.

I ran a 5:13 Mile in high school. I was a decent runner, I guess, but I had no idea I would enjoy it this much. I love running.

ANN ARBOR -- Talk about athletes who reach their full potential.