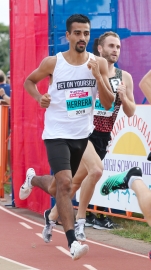 While attending Cerritos College, in 2011, Herrera won the 5000m and 10,000m state titles; he later transferred to UCLA.

FUN FACT: He has U.S.-Mexico dual citizenship and holds the Mexican Mile record of 3:56.13.

Summary by Bring Back the Mile

WASHINGTON, DC - At the BBTM Grand Prix Tour 2019 finale, The Navy Mile, on a cloudy Sunday...

SoCal native and 2018 BBTM GP Tour champion: "You find out that the chip on the shoulder type mentality can only take you so far."

Daniel Herrera, 26, is a rising star in the Mile ranks. In 2018, Herrera, with consistent racing, won the men's BBTM Grand...