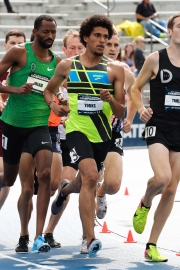 At the University of Washington, he was an 8-time All-American and his 3:53.89 in February 2016 is the fastest indoor Mile by an American collegiate.

Yorks is also Special Olympics Ambassador; his sister Brittany was born with developmental & physical disabilities and uses a wheelchair.

Olympic Hopeful Seeks to Deliver on Promise to His Sister

In the past four months, Izaic Yorks, a senior at the University of Washington, has run personal bests at four distances, including the Mile...

3:53 Miler opts to run with Distance Medley Relay team and the 3000 meters at upcoming NCAA Indoors

By Larry Stone, The Seattle Times

On Tuesday, Washington track and field coach Greg Metcalf did something so extraordinary that he had to call a friend to share it.

Sitting in his office at...