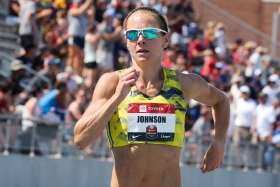 
Lauren Johnson, a three-time NAIA All-American at Huntington University, won the 2016 Sir Walter Miler in a meet, outdoor North Carolina state and personal record of 4:25.04 (and her first sub-4:30 Mile), and six days later, at the third stop on the BBTM Grand Prix Tour 2016, Johnson won the ServiceNow West Chester Mile, stopping the clock at 4:31.33.

The forrmer Oregon Track Club Elite athlete placed 4th at the 2015 USA Track & Field Championships, but she did not have an "A" standard qualifying time to punch her automatic ticket to the IAAF World Championships in Beijing. Thus began her summer European circuit in hopes of dipping under the necessary 4:06.50 in the 1500m or 4:25.20 in the Mile. On July 18 in Heusden-Zolder, Belgium at the KBC Night of Athletics meet, Johnson placed second, clocking 4:04.17 to secure her spot on Team USA.

FUN FACT: Lauren went to college on athletic scholarships for both track and basketball.

We exchanged emails with rising U.S. Mile star Lauren Johnson ahead of Friday evening's GNC Live Well Liberty Mile showdown in Pittsburgh. Lauren, 30, who is currently living in her hometown of Huntington, Indiana, but is essentially "homeless" this track season before...

Runners of all ability levels will converge on Henderson High School Thursday night, August 11 for the ServiceNow West Chester Mile, a celebration...

Professional runner Lauren (Davenport) Johnson knew she was going to address a crowd in her hometown at Huntington North High School on...

“You wouldn’t necessarily put a Lauren Johnson into the top echelon of the American middle distance crew,” Rowland said. “She took her opportunity…. that’s the beauty of our sport. That’s what make us tick and keeps us going."

Before Lauren Davenport Johnson could run in Beijing, she had to tumble in...

Eugene’s Lauren Johnson gets her World Championships qualifier in Belgium

Johnson had provisionally qualified for the World Championships in last month's USA Track & Field Outdoor Championships at Hayward Field in Eugene, but had not achieved the minimum qualifying standard.