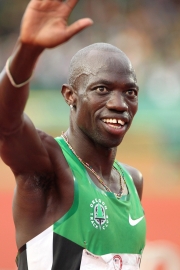 In 2012, he was the recipient of the Visa Humanitarian of the Year Award by USA Track & Field, and Lopez was one of the Lost Boys of Sudan.

FUN FACT: In 2008, he carried the United States flag at the Beijing Olympic Games opening ceremonies.

RALEIGH, N.C. – For the second year in a row, the Sir Walter Miler Women’s race was decided by a sprint down the home stretch. The race started out with Sara Vaughn going to the front...

No Big Sky Conference athlete’s story has received as much national attention in recent years than the journey of Lopez Lomong....

Centrowitz, Manzano, and Lomong will go to Moscow.

The confusing and somewhat nerve-racking matter of who will represent the United States in the men’s 1500 at the World Championships next month was resolved on Saturday after a fast race at Meeting Areva, a...

Is Something Wrong with U.S. Milers?

As runners line up for the first round of the men’s 1500 meters on Thursday at the USA Outdoor Track & Field Championships in Des Moines, none of them will have the "A"...

FLORENCE, Ala. – South Sudanese-born Olympic track-and-field athlete Lopez Lomong – one of the so-called “Lost Boys of Sudan” – will be the guest speaker for the University of North Alabama’s spring commencement at 10:00am Saturday, May 11, at...

Changing the World, One Step at a Time

A hand roughly shook his shoulder as he heard the panicked whispers from his friends, “Wake up, Lopepe, we have to go NOW!” Though his legs felt like lead, the soles of his feet were bloody and he could barely walk, he began shuffling forward as fast as he could.

Team Schumacher Wants to Make the Millrose Games a Habit

Now, he can't wait to go back.

NEW YORK – Under the bright lights and amidst the roaring of a sold-out crowd at the...

"Faced with overwhelming suffering even at a young age, he rose above the adversity and now uses his success to help others overcome their challenges. Lopez is a role model for athletes and an inspiration for us all."

INDIANAPOLIS - Lopez Lomong has been named the...

Back in the fall of 2007, HBO aired a moving documentary about distance runner and U.S. Olympian Joseph “Lopez” Lomong. It told the story of the terrifying early life of the African native, who was kidnapped at the age of 6 by rebel soldiers of the Sudan People...

Olympic runner Lopez Lomong is a ‘warrior inside’

Four years after Lopez Lomong carried the Star-Spangled Banner into the 2008 Olympic Opening Ceremony in Beijing,...