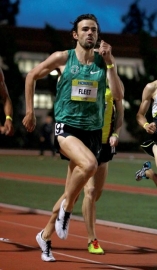 Mac Fleet finished runner-up to then OTC teammate Jordan McNamara at the 2015 GNC Live Well Liberty Mile, both timed in 3:59. Fleet competed for the University of Oregon, where he was a multi-NCAA All-American. On his home track at Hayward Field in June 2014, Fleet defended his 1500m NCAA crown, clocking 3:39.09. He also won the 2013 NCAA 1500 meter title, earning his victory in a tactical race with a swift 52.2 final lap.

Fleet also had an impressive high school senior year, capturing the California state championships in both cross country and the 1600 meters. He then went on to be the 2009 USA Junior champion at 1500 meters, winning in 3:47.44 as well as the 2009 Pan American Junior 1500m gold medalist clocking 3:48.04.

By Pat Price, The Daily Relay

Welcome back to 5 Questions, where we pick the brains of people from all areas of the running scene. Today, we were lucky enough to catch up with NCAA 1500 meter champion, Mac Fleet. Follow him on Twitter @macfleet1 and Instagram.

The Dow Wilson Inspirational Award is one of the most coveted accolades a male Oregon track and field athlete can receive. It’s given annually to the team member who has proven to be inspirational and tenacious through hard work and leadership. Of all the story...