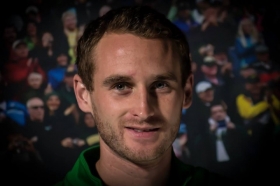 Under Armour introduces its new professional running team, Dark Sky Distance, based in Flagstaff, Arizona. This group of best-in-class athletes consists of middle and long...

I think I have a good combination of speed and endurance and that helps with the Mile. It is a very difficult event. I will say that. It's never easy.

EDITOR'S NOTE: There have been many track and field standouts in Montana history, and Patrick Casey is...

Pat Casey, who is coming off a strong performance at the IAAF 2014 World Relays.

1) Daily Relay: Congratulations on your strong leg on the American Record and Silver Medal 4×1500 team. What was it like to be part of that group, and were you happy with how the race...

Catching Up with Miler Patrick Casey

After transfering from Montana State University to the University of Oklahoma just over a year ago, middle distance star Patrick Casey is ready for a big senior track season. After running a collegiate #1 Mile time of 3:56.28 at the Razorback Invitational back at the...