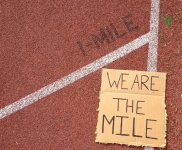 SANTA BARBARA, Calif. - Today marks the first day of competition at the 2012 U.S. Olympic Track & Field - Team Trials, when athletes in the Hammer Throw take to the cage to see who will punch their ticket to London. In honor of this 11-day track-apolooza, ending Sunday, July 1, we've launched the Bring Back the Mile "People's Contest". The Grand Prize winner will take home a special Mile Legends package including an exclusive Jim Ryun autographed "I Am the Mile" t-shirt and one-of-a-kind signed items for BBTM by Don Bowden, the first American to break four minutes in the Mile, and Mile great Marty Liquori. Four runner-ups will receive a BBTM Lap 3 VIP membership package.

In addition, in partnership with VS Athletics, we will have a special BBTM banner up at the Wild Duck Cafe, the site of the week long "People's Party", for anyone to sign with their name and Mile PR. This Saturday, June 23, also marks Milers night at the Wild Duck, which includes an "unofficial" meeting of the USA Miler's Club - started by Peter Thompson, modeled after the British Milers Club.

"For BBTM's mission to replace the 1600 meters at High School State Championship Meets with the Mile and to return the iconic distance to prominence on the American sports and cultural landscape, we need two key components," said Ryan Lamppa, BBTM Founder. "One, we need the support of both past and present Mile greats as well as the Mile events, who to-date have really stepped up for our campaign, and two, we need the support of the people – athletes, coaches, fans and officials – at the grassroots level. This contest is about building off the early success of our movement launched five months ago and adding to this foundation with people across America."

To enter the BBTM "People's Contest", do one of the following. Winners will be drawn randomly after July 1.