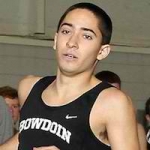 2014 NCAA Division III indoor Mile champion talks about a career that has led him to the brink of a sub-4:00 Mile

By John A. Kissane for Running Times

He was the top high school two-miler in Massachusetts the spring of 2010, his senior year at Nashoba Regional High School in Bolton, Mass. But Coby Horowitz spurned Division I coaches and chose to follow his sister Lindsey to Division III Bowdoin College in Brunswick, Maine, that fall. Running was not his first consideration in selecting a school but Horowitz knew it would be an important ingredient of his college experience. He’d met Coach Peter Slovinski and several team members and had confidence he’d fit in well on Bowdoin cross country and track teams.

Now a senior sociology major, Horowitz, 21, has improved steadily at Bowdoin. Despite an admitted aversion to cross country racing, he’s managed three All-American finishes as a Polar Bear harrier. Last fall he used his trademark intelligent pacing to move from 60th at the mile to 45th at two miles, 25th at four miles, and 19th with 800m to go. Horowitz passed another seven athletes during his finish drive to wind up 12th, his third-straight top-15 nationals performance.

On the track, where he feels considerably more at home, Horowitz has focused attention on contributing to Bowdoin’s potent distance medley and 4 x 800m relay teams. Individually he ran everything from the 800m to the 5000m before developing a passion for the Mile and 1500m, even though Horowitz and Coach Slovinski both feel he’s better suited for longer distances. After Horowitz ran a 4:06.85 Mile last winter, the prospect of going sub-4:00 this year was suddenly realistic. And during the just-completed indoor season Horowitz dropped his Mile PR to 4:00.41 in winning the New England Championships on March 1. The mark eclipsed the previous Division III record of 4:00.96, held since 1997 by Karl Paranya of Haverford College. A week later Horowitz ran 4:01.11 to take runner-up honors at the Columbia Final Qualifier at the Armory in New York City. It was on to Division III nationals, where Horowitz prevailed in 4:08.40, slow by his standards but his first individual national title.