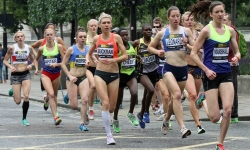 The Amba Hotels City of London Mile returned for the second year on Sunday with around 3000 people taking part in the free-to-enter event in the British capital.

Included in the series of races were two elite events, which were won by Britain’s Alison Leonard and Julian Matthews of New Zealand.

Leonard won convincingly in 4:39.23 having led from the halfway point after the pacemaker completed her duties. That time shaves more than four seconds off the course record set by Australia’s Genevieve LaCaze.