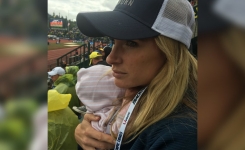 From a personal standpoint, I have to say that 2016 was, without a doubt, the BEST for me.

From a personal standpoint, I have to say that 2016 was, without a doubt, the BEST for me. I became a mother and got to experience all the joys and emotions that used to just seem like cliches for how people described motherhood. Now, I actually get to FEEL these emotions (not just hear about them) and let me tell you, they are totally amazing. Yes, love IS blind and yes, I do believe that Abigail is the cutest, greatest, most talented little human ever.

All that being said, from an athletic / running standpoint, 2016 definitely fell short for me, but not because I didn’t “make the team”. Between pregnancy and injury, I just didn’t feel like the same person. But, I worked hard and got in good shape after the birth of my daughter, which was the goal. My husband and I knew there were issues that could go wrong (and likely would), but after a very successful pregnancy of training, I ran into a postpartum issue that I didn’t even know existed (postpartum low bone density). Still, I felt like I worked through it and got myself into very good shape leading into the Trials. That I’m still proud of – especially considering the things I had to overcome. However, I never feel like I truly got to show that fitness, and that’s disappointing. After fighting extremely hard to be on the starting line at the Olympic Trials, I had a mishap with my achilles that left me barely able to walk off the track after the first round.