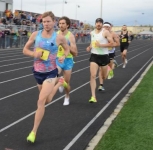 Blankenship, of Eugene, Oregon, topped a field of elite runners with a time of 3 minutes, 57.85 seconds.

"I think @benfblankenship's 3:57 today may be the the fastest Mile on Alaska soil by either human or sled dog," tweeted fourth-place Kyle Merber after the race.

It was the second time in four days that Blankenship cracked the 4-minute mark on an Alaska track. On Wednesday at West High, he was one of two men who broke the barrier — Merber won in 3:59.36, Blankenship right behind in 3:59.67.

Blankenship's Saturday time eclipsed the indoor time of 3:58.3 registered in 2013 by Jack Bolas of Washington, D.C. Until this week, Bolas was the only man to run a sub-4:00 Mile in Alaska.