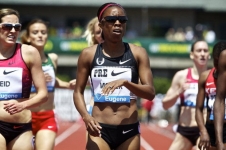 Treniere Moser is so tough and stubbornly determined that when she fell on the home straight of the 1500 semifinals at the 2004 U.S. Olympic Trials, she crawled across the finish line.

But guts and determination take an athlete only so far, by the close of the 2012 outdoor season Moser – formerly Treniere Clement – could see the end.

"I was putting a lot into it and I was getting nothing in return," Moser said. "It was just really hard, because I pride myself on being a hard worker and it was just not showing at all. I thought it was me. I thought my best days were over."

Except it wasn't, and they aren't.