In San Diego one day last week an 18-year-old boy and a former football linebacker sat down to map out the strategy the boy would have to follow to defeat the most famous of Olympic champions in a Mile run. The gall of the pair could be matched only by the futility of their project. But two nights later, in the National AAU Track & Field Championships at San Diego, the man and the boy produced their shocking upset. Pounding out of the last turn like a halfback sweeping end, Jim Ryun, his broad, bony shoulders thrown back, his long, bony knees pumping like oil drills, climaxed a perfectly run race by holding off Peter Snell's furious, final challenge in the most exciting race of an already eventful track season. Ryun's time of 3 minutes, 55.3 seconds was an American citizen's record and his brilliant race marked another breakthrough by American teenage distance runners. Only 90 minutes earlier 19-year-old Gerry Lindgren had pushed Olympic champion Billy Mills to a world record six-mile time of 27:11.6, diving for the tape in such close tandem with Mills that he received equal credit for the record. 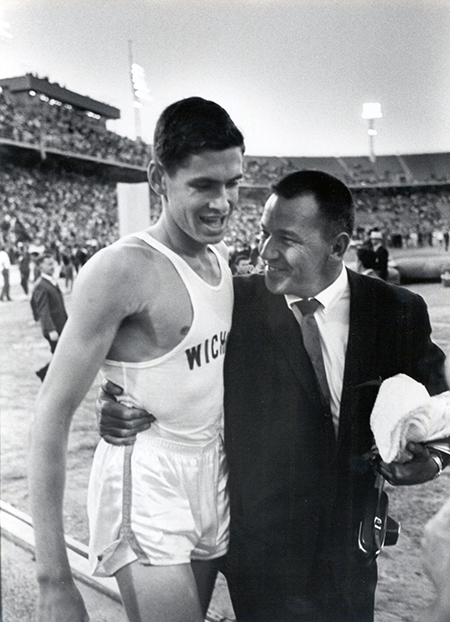 In addition to prestige and world records, at stake in San Diego for the first two American finishers in each of 19 events were places on the U.S. track team that will face the Russians in Kiev at the end of July. But young Ryun and his high school coach, J. D. Edmiston (left), who did far better as a linebacker at the University of Wichita 15 years ago than in the shot, discus and hurdles, were after bigger game.

"We're here for two reasons," Edmiston announced to friends when he and Ryun arrived in town, "and the Russians have nothing to do with them. We're out to beat Snell and we're out to beat the world record. It is going to be a barn-burner."

Three weeks earlier Ryun had finished third to Snell and Jim Grelle in the Compton Invitational (SI, June 14), and had been both vastly elated and tremendously dejected by his performance. He had run outside in the second lane for practically the entire race, adding perhaps 15 or 20 yards to the 1,760 the rest of the field had covered.

"I realized I had run a fast race," Ryun said, "but it was such a dumb one. When Snell made his move at the end I just stood there and watched him."

"But it was significant," chimed in Edmiston. "For the first time Jim realized that he could beat a Peter Snell."

Six nights after Compton, Ryun was back home in Wichita, Kans. grinding out a training session that for sheer speed and volume was far greater than even the hard-working Snell had been able to undergo in New Zealand in preparation for his Olympic 800 and 1500 meter double victory. Walking for 60 seconds between quarter miles, Ryun had galloped 20 of them at an average speed of 50 seconds per quarter. Despite the exhaustion that must inevitably follow such punishment, he had covered the last one in 56 seconds. Ryun continued his hard training for the next 10 days and then, after a particularly rigorous workout on the Monday before Sunday's race in San Diego, began to ease off. The strategy that Ryun and Edmiston concocted called for the runner to stay near the lead throughout the early part of the race, but in a free and clear position so that he could run close to the pole and not add extra yards. With 330 yards to go, Ryun was to take the lead. Then, as soon as he heard someone spurting up behind him, he would mount a finishing—and hopefully winning—sprint of his own.