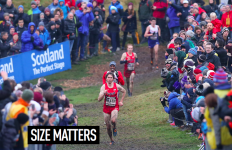 Steve Cram described Garrett Heath as a ‘surprise winner’ when he beat Mo Farah to first at the Great Edinburgh XC earlier this month. We speak to the American to find out why, actually, it was inevitable.

In fact, Garrett Heath's win in Edinburgh was his third on the bounce. In 2014 and 2015 it was the 4K victories he brought home. With his preferred distance scrapped this year he had to double up against double-double world champion Mo Farah: this wasn’t going to be a walk round Holyrood park.

But as the runners lined up on the start line with all focus on Farah, Heath already stood out. “He’s bloody huge,” as one SPIKES correspondent put it.

Heath is a beast. And by that we’re not simply referring to his training group Brooks Beasts TC. The 30-year-old has a striking physique, tall with a wide upper body frame – the exact opposite of most middle distance runners. And he’s got a ridiculous VO2 max, he “honestly can’t quite remember whether it was 85 or 86”. Either way, it’s huge!