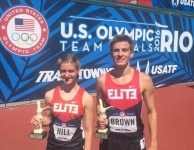 "I didn’t know what I was going to do, but it was just like my dad says, 'it's the icing on the cake,' something extra after the season."

Lindsay Rossmiller, for the Missoulian

EUGENE, Ore. -- Kalispell Glacier's Annie Hill is ready for some ice cream and a two-week break.

Hill capped off a long extended summer track season Saturday with a win in the Mile race of the top high school girls in the country at the Olympic Trials. She won in 4 minutes, 44.16 seconds.

"I was really excited to be able to race at the Olympic Trials and I'm pretty pleased with how it went," the 16-year-old said.

Saturday morning, she got a chance to run in front of her biggest audience yet as more than 1,000 fans filled the stands for the competition to determine Team USA for the Olympics in Rio de Janeiro.

"I have never been to Hayward Field and it is something, it's pretty special and just being able to see her in that atmosphere . . . It makes you emotional," said her dad Micah Hill.

Prior to the Trials, the top high school runners in the country gathered for the invitational Nike ELITE distance camp and then got to run an exhibition race on the biggest stage of their sport.