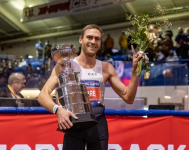 The 115th Millrose Games will take place on Saturday, February 11th, exactly one month from today, at the Nike Track & Field Center at The Armory. As always, the world’s most historic indoor track & field event will conclude with the running of the men's Rudin Wanamaker Mile, which will feature defending champion Olli Hoare looking to win the trophy for a second consecutive year.

The Millrose Games is extremely honored that the Rudin Family will be the sponsor of the Wanamaker Mile races. Over the past one hundred years, the Rudin Family has become one of New York City’s largest private real estate companies and a generous supporter of running. Jack and Lewis Rudin were the first sponsors of the TCS New York City Marathon, and their children and grandchildren have carried on the legacy, supporting the sport throughout the five boroughs.

“The Rudin family is honored to sponsor the men’s Wanamaker Mile, in addition to the women’s race, and welcome athletes from around the world to New York to participate in the sport’s most competitive Mile in the United States,” said Bill Rudin, Co-Chairman and Chief Executive Officer of Rudin. “As a founding sponsor of the New York City Marathon, as well as previous Millrose Games events, running is extremely special to our family and this terrific city. We are looking forward to cheering on the athletes whose incredible talent will be on display next month at The Armory.”

Hoare set the indoor Australian record in the process of winning the 2022 Wanamaker Mile in 3:50.83, one of four national records that he currently holds. Outdoors, he won the 1500m gold medal at the 2022 Commonwealth Games, setting the meet record in that event as well. Hoare was an Olympic finalist in Tokyo, as well as an NCAA champion and eight-time All-American at the University of Wisconsin.

“I’m thrilled to be able to come back and defend my Wanamaker title,” said Hoare. “It will be great to be out there competing at one of my favorite Mile races in the world.”

Many of the world’s top Milers will be eager for the chance to knock Hoare off the throne.

►Cole Hocker is the 2021 U.S. Olympic Trials 1500m champion, and he placed sixth in the Olympic Final. He is the reigning USA Champion in the indoor 1500m and 3000m, and a former three-time NCAA champion.

►Mario Garcia Romo placed fourth in the 1500m at last year’s outdoor World Championship final. He is the defending Spanish champion in the event, as well as an NCAA champion and the bronze medalist at the European Championships.

►Yared Nuguse was the fastest American over 1500m in 2022, and he qualified for the Tokyo Olympics.

►Eliud Kipsang of Kenya and the University of Alabama holds the NCAA 1500m record with his best time of 3:33.74.

►Johnny Gregorek sports a swift personal record of 3:49.98 in the Mile, and he reached the final at the 2017 World Championships.

►Sam Tanner is a three-time national champion for New Zealand, and he placed sixth in the 1500m at the Commonwealth Games.

Also in the field is World Championships semi-finalist Neil Gourley of Great Britain, 3:50 Miler Sam Prakel and two-time USA champion Drew Hunter. In addition, the winner of the Mile at the Dr. Sander Invitational Columbia Challenge on Saturday, January 28th will also be guaranteed a spot on the starting line, adding to the intrigue.

The Millrose Games is a World Athletics Indoor Tour Gold meet. With the highest-level competition at the youth, high school, collegiate, club and professional levels, there is truly something for everyone at the Millrose Games.

Stay tuned over the coming months as more athletes and events are announced. Tickets can be purchased at: millrosegames.org