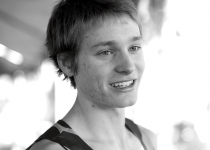 Andrew Hunter didn't run in middle school, but the senior at Loudon Valley High School in Purcellville, Virginia, had plenty of background in the sport. His parents, Marc and Joan, are not only the cross country and track coaches at Loudon Valley, they're accomplished runners themselves.

Marc ran for Cleveland State, where he placed fourth at the NCAA Championships in cross country before qualifying for the 1980 Olympic Trials in the 5000 and 10,000 meters. Joan ran for the University of Virginia and set a Masters world record in the 4x400-meter relay at the 2014 Millrose Games. They didn't push their son to run, however.

“I hated running when I was younger,” Hunter says. “I tried running for a year in middle school, then stopped because I was really into football, basketball and baseball.”