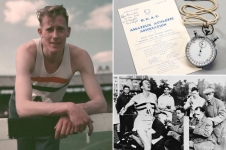 Roger Bannister's achievement remains a unique, still resonating landmark in our sport and beyond

The IAAF Heritage Collection has announced the latest addition to its archive of athletics memorabilia on the anniversary of one of the most celebrated feats in athletics, a signed program from the Oxford University Athletics Club v Amateur Athletic Association match on May 6, 1954 which saw Roger Bannister become the first man to run a Mile in under 4 minutes.

The autographs on this historic artifact, donated by a private collector, are from the three main protagonists in the race: Bannister himself and his pacemakers Chris Brasher and Chris Chataway.

Bannister’s iconic world record of 3:59.4 on a blustery evening – with the gun going at 6:00pm local time – at the Iffley Road Athletic Ground in Oxford has become one of the most celebrated deeds in the history of the sport.

The BBC at the time referred it as “The Everest of athletic achievement” while the many tributes to Bannister after his recent death on March 3 highlighted its special place in history.

“There is not a single athlete of my generation who was not inspired by Roger and his achievements both on and off the track. He made the impossible possible,” said IAAF President Sebastian Coe, himself a former world record holder for the Mile.

Coe has also donated a special ‘sub-4’ tie to the IAAF Heritage Collection which was presented to him by Roger Bannister after the first of his three world records over the classic distance when he ran 3:49.0 in Oslo in 1979.

Bannister commissioned a very limited edition of the tie to commemorate his feat, which he initially gave to people who had assisted him in his quest to become the first man to run under 4 minutes. Coe was the last recipient of such a tie.

Although the number of runners who have subsequently emulated Bannister and run under 4 minutes for the Mile – of significance because of the symmetry of running under 60 seconds a circuit for 4 consecutive laps of the track – will surpass 1500 men in 2018, and the world record now stands at 3:43.13 to Hicham El Guerrouj, but this remains a unique, still resonating landmark in our sport and beyond.

Consequently, memorabilia related to the race also has special interest and a privileged place in the IAAF Heritage Collection.

Estimates of the number of spectators who witnessed Bannister feat have varied between 1,000 and 2,000. No exact, or nearly exact, number of those who were at Iffley Road on that day in May 64 years ago has ever been established.

The four-page paper program for the match was sold on the Iffley Road gate for sixpence (equivalent to 65p or US$0.90 today) and although the stand along the home straight was packed, television footage shows that there were few spectators around the rest of the track.

Consequently, even unsigned programs have a considerable rarity value and this example is thought to be one of the very few signed by Bannister, Brasher and Chataway collectively.

Donated with the program is a copy of the 1955 edition of Athletics, which had chapters written by Bannister, Brasher and Chataway and features a photo on its front cover of the three men during the historic race the previous year.

The trio have appended their autographs next to their respective contributions to the book.