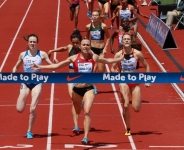 The aging Justin Gatlin and retired Usain Bolt have handed the torch to youngsters Christian Coleman and Noah Lyles in the short sprints. The name Allyson Felix is nowhere to be found at the top of the yearly marks, having been replaced by the likes of NCAA stars Lynna Irby and Kendall Ellis. And Sydney McLaughlin and Michael Norman have catapulted themselves into superstar territory in track & field circles.

We’ve seen less of this trend in the longer distance races, but could there be a shift in the power structure coming soon in the women’s middle distances?

Without a doubt, Jenny Simpson has been the alpha dog of U.S. 1500 meter running in recent years. She’s won the last four 1500m outdoor national titles and has four global medals over the metric Mile distance, including a thrilling silver medal at last summer’s World Championships.

Despite her dominance, she showed a bit of vulnerability a few weeks ago at the Pre Classic, when fellow U.S. Olympian and rising star Shelby Houlihan unleashed a furious kick on the final straightaway to pull off the upset in a world leading 3:59.06, besting her personal record by more than four seconds.