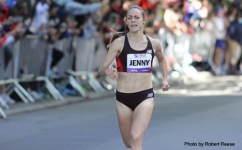 After a dream season, the World Championships silver medalist opens up about track strategy, her goals for 2014 and flood-ravaged Boulder

Above all, there was Simpson’s silver medal in the IAAF World Championships 1500m in Moscow, one that will go nicely with the gold she earned at the 2011 championships in Daegu. This one that proves that Daegu, in case anybody thought so, was no fluke. Her stature is unimpeachably world class.

After all that came her final 1500 of the year on Sept. 6 in Brussels, where Simpson tumbled to the track just before the bell lap. She got up but placed 10th in 4:10.70. And on Sept. 14, she’d hoped to be in the Great North City Games in Newcastle, England, for a Mile that was mostly on the roads but had a track finish. Organizers wouldn’t let her in. “I expressed a lot of interest. I had family in England,” Simpson said. “I never heard a clear reason why I wasn’t invited to be a part of it.”

So, as she came to New York for last Sunday’s NYRR Fifth Avenue Mile, Simpson hadn’t had a confidence-affirming race result in awhile. She admitted (afterward) that she’d been nervous. Her coach, Mark Wetmore in Boulder, Colo., told her, “Well, if you’re nervous, just run as hard as you can.”