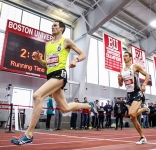 “I shocked myself pretty bad with that one,” says Johnny Gregorek, who scared the indoor U.S. Mile record with his 3:49.98 to take second to Yomif Kejelcha’s spectacular 3:47.01 world record Mile at Boston University on Sunday, March 3. “I knew I was ready to PR. The track is known to be fast and the race was going to be set up to be fast. I went in there with the mindset of racing and running as fast as I could. I just wanted to compete well against those guys. I wasn’t really looking at the clock. “I just kept picking it up, picking it up, picking it up.”

The 27-year-old journeyman Miler was hoping to nail a time under 3:53.00 to make the 2019 World Championships Q-standard: “That’s the #1 thing I had in mind.” He was stunned to read the clock afterward. Coached by Frank Gagliano since he left Oregon in ’15, Gregorek says, “It just goes to show that anything can really happen if you trust your fitness and go for it.”

Gregorek’s road to the elite has been anything but fast. “I haven’t ever been touted or praised as any sort of superstar,” he admits. “I’ve had a lot more failures than I’ve had successes, a lot more bad races than I’ve had good ones.”

From early on in his life, he knew his parents were into running. “There were always boxes of all these dusty uniforms that had ‘USA’ on them and all these running shoes all over the basement. I knew that they were good runners but it wasn’t the most impressive thing to me when I was young. You’ve got to go out and run for yourself and see how hard it is.