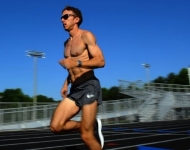 Webb still holds the American record in the mile and still trains each day like he’s on fire. He has spent the past several years trying to return to that elite level where everything just clicks, where things happen instinctually.

Instead, he’s 29 years old now, and so much has changed. Away from the track, nearly all of it for the better: He’s back in Virginia, and he and his wife, Julia, are expecting their first child, a girl, any day now. But on the track, Webb’s best times are all nearly five years old, and he seems to be running circles in his own head.