Looking Back at the Best Moments from the Millrose Games 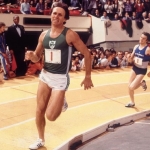 For the first time since the inaugural competition in 1908, the Millrose Games, the oldest continuously contested indoor track meet in the United States, will not happen this year. Originally scheduled for February 13 at the Armory Track & Field Center in New York, the competition was canceled as a safety precaution amid rising cases in the COVID-19 pandemic.

“Cancelling the iconic Millrose Games was a very difficult decision, but with all the health concerns surrounding an event of this complexity, rather than risking the athletes, officials, meet personnel, media and others, we have decided to wait until February 12, 2022, for the next edition of the Millrose Games,” meet director Ray Flynn said in a statement on December 22, 2020.

For more than a century, Olympic gold medalists, world champions and record holders have launched their track seasons at the Millrose Games. With the prestigious competition scheduled to return next year, it seems fitting to take a moment and reflect on the many historic performances that have thrilled track fans inside Madison Square Garden and The Armory (since 2012). Here are nine highlights from Millrose Games past.

#9 Paavo Nurmi sets indoor world bests in 1925—after traveling for 2 1/2 weeks
The winter of 1924-25 was a standout season for Finnish distance runner Paavo Nurmi, and it started with a victorious opening night inside Madison Square Garden.

Months after winning the 1500 and 5000 meters within two hours at the 1924 Paris Olympics, Nurmi was scheduled to compete in the Mile and 5000 meters—both inside an hour—at Millrose on January 6, 1925. Prior to his arrival in New York City, Nurmi traveled for two and a half weeks across the Atlantic Ocean and trained while onboard the ship, according to World Athletics.

In the meet’s opening night, Nurmi won both events and set indoor world records of 4:13.6 and 14:44.6. After the Millrose Games, the Flying Finn went on to dominate a U.S. tour in which he won 51 of his 55 races and set 12 world indoor records.

#8 Mary Decker shatters world indoor record in the 1500 meters
As The New York Times reported on February 8, 1980, Mary Decker was “the hero of the 73rd Wanamaker Millrose Games” after she beat her opponents by half a lap to win the women’s 1500 meters in 4:00.8, a world indoor record. The performance took place 12 days after Decker broke the world record for the outdoor Mile by running 4:21.7 in Auckland, New Zealand. Her time at Millrose translated to 4:19 for the Mile.

Just 21-years-old at the time, Decker broke the records in her return to the sport after undergoing surgery on her calves, a procedure which gave Decker her health back after a slew of stress fractures and launched a career that included two World Championship crowns in 1983.

During the 2020 Millrose Games, the Wanamaker Mile was awarded the World Athletics Heritage Plaque and Coghlan donated one of the Wanamaker Mile trophies that he won to commemorate his seven victories. He also donated the green spikes he wore when setting the indoor Mile world record of 3:52.6 in San Diego in 1979.