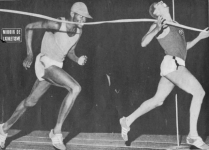 From Once Upon a Time in the Vest

In New Zealand, Kip Keino and Jürgen May are enjoying the mild weather of the southern hemisphere. The headline in the September issue of Track & Field News proclaimed “1965 World Mile to 10,000 Record Revision Complete”. Not so fast, Cordner & Bert, we got one more coming.

EDITOR'S NOTE: Our more astute readers may notice a discrepancy in those splits. He ran his fastest split in the middle of the race? No one was with him – Bill Baillie was a distant second in 14:01.2 - so there was no one he was trying to drop. There is no mention of a quickened pace. Hmmm. What if there was a misprint and the two mile mark was hit in the typographically similar 8:38.3? That would make the fourth half mile 2:09.6 and the fifth half mile 2:08.7. The error would have to have been made on the Auckland end of the communication, as TFN made a point of the two mile time being 8:33.2, 6.8 seconds faster than Clark's split in his record race. Something for the more insightful among us to ponder.

Keino says he could have gone faster if he had someone with him but that this is the fastest track he has ever run on.

May, however, doesn't experience the same warm, cuddly New Zealand welcome as Keino. He loses the Mile to John Davies 3:59.0 to 3:59.1.

On December 4 there is a meet in Napier which Keino and May attend. May takes the half easily in 1:48.9. Keino once again has no significant opposition and soldiers on by himself to a 3:56.9 Mile.

December 6 finds the two visitors in Tokoroa where Keino displays admirable consistency, cranking off another 3:56.9 to defeat Davies, 4:01.0. May strides through an unpressed half in 1:49.7. Two days later in Hamilton, Keino, suffering from a lack of competition, runs 3000 in 7:50.4, 10.8 seconds off his world record. It appears that he will have no significant competition on this tour.

The duo's last tour clash comes four days later in Auckland with similar results. Keino tries to shake May but succumbs with 40 yards left, 3:54.1 to 3:54.4 (photo above). Merry Christmas, Michel Jazy. Your present is getting to keep your record.