Morgan Uceny Strikes Back: “I just need to get on the podium” 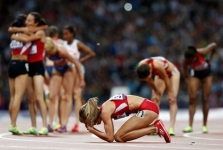 Lightning does strike twice. Just ask Morgan Uceny. But after a run of bad luck, the U.S. middle-distance ace is back on her feet, living in England and has her eyes firmly on the podium… and her opponents.

Luck. It’s either with you, or it’s not. And if luck has eluded any athlete recently it’s U.S. middle-distance runner Morgan Uceny.

At each of the past two major global championships Uceny has gone into the competition as a strong favourite for a 1500m medal, only to find herself tripping at pivotal moments.

At the 2011 World Championship final in Daegu, she went into the race as one of the pre-event favourites. The US champion had claimed impressive Diamond League wins in Lausanne and Birmingham and went into the race in the form of her life.

With a little over 500m to go of a slow final, Kenya’s Hellen Obiri tripped in front of her and with nowhere to go, Uceny also crashed to the floor. She wound up the season as world number one but with a deep sense of regret about what happened in South Korea.

Almost 12 months on the American suffered the same fate in the Olympic final. Poised in prime position to strike with a little under 400m remaining, the Indiana-born athlete’s trailing foot appeared to catch Ethiopia’s Abebe Aregawi. Morgan tumbled agonisingly to the ground. Disaster.