For me, all that training paid off on a cool evening August 10, 1966 when I became the 19th American and first Texan to run a sub-4 minute Mile.

Fifty-three years ago, I became the first Texan to run a Mile under 4 minutes. What I didn’t know at the time was that only 18 Americans had ever accomplished that feat. I have been asked many times about writing about that achievement and up to now, I had not given it much thought. Then I realized that I spent thousands of hours training to excel in an event that took me less than 4 minutes to complete. Was it worth such an expenditure of time and  effort? And would I recommend others to try it?  Yes, and here is my story.

In 1960, at age 16, (when everyone called me Richard), I finished 5th in the state track competition with a 4:30 Mile time, a respectable time for a 10th grader. By my senior year in high school I had improved my time significantly with a 4:10 Mile, one of the fastest ever by a U.S. high school runner.

Three state championships earned me a track scholarship at the University of Texas, Austin. UT Austin had great academic programs and one of the finest track programs in the nation. I started college with three goals: To run a sub-4 minute Mile, to graduate from the University of Texas and to earn All-American honors in Track & Field.

At Texas I was fortunate to have Pat Clohessy, a former runner at the University of Houston and U.S. champion in the 5000 meters. Clohessy came to UT to earn his Masters degree and was offered a graduate assistant position in the track program. He served  as my distance coach and mentor.  Clohessy trained with us daily  throughout my freshman and sophomore year and his mentoring paid off. In the summer of 1963 I improved my Mile time to 4:05 in a track meet in Wales, British Isles. I came in second but defeated two of England’s top Olympic runners. It was the fastest Mile time for a collegiate freshman in the United States. I was on my way.

A serious track injury in an indoor track meet in Fort Worth in February 1965 nearly ruined my track ambitions. As I started the 1000 yard run, I felt a sharp pain in my left ankle. We were running indoors on a dirt track and thus everyone used regular long spikes. A spike from the runner behind me caught my ankle and served my tendon. I felt the pain, but since I was in the lead, I decided to finish the race.

I crossed the finish line in first place, but I left blood dripping from the back of my shirt. It was a serious injury and it required three months to cure the infection in my leg related to the dirt field. My surgery went well and after four months I resumed my training--albeit quite slowly. I was uncertain if the injury would hamper my full development as a primer runner. By December I was back in top shape. I had lost the 1965 track season, but felt lucky to be competing again.

My preparation for a sub-4 minute Mile required superb conditioning and being at the right track meet at the right time. I was living in Texas, but in the 1960s our state shut down most of its competitive track meets over the summer. Everyone agreed that California offered the best opportunity for competitive meets on a weekly basis and possibilities for fast times.

In the summer of 1966, I spent the summer in California with the expressed goal of running a sub-4 Mile. Two friends made the transition to running in California possible for me. First, Gene Comroe, a UCLA trackman who hailed from Dallas and competed in the same Texas state and regional high school meets with me, assisted by providing a spare bedroom for me over that summer. Comroe was a member of the Southern California Striders, a track club that included the UCLA middle distance star Bob Day, a sub-4 minute Miler as well as a world class runner at 800 meters.

Comroe and Day introduced me to Atis “Pete” Peterson, the Striders’ distance coach. Peterson’s famous motto was “Run for Fun,” and many of our workouts over the summer of 1966 were exactly that. Peterson trained Day and Ted Nelson, a former Canadian middle distance star and the American indoor record holder for 1000 yards.  Not long after meeting Nelson, he and I both decided that we would add extra speed training to our practice to prepare us for a sub-4 minute Mile.

Two events prepared me personally for my sub-4 attempt in 1966. While it has been more than 50 years ago, I remember the events quite clearly.  In June of 1966 I competed in the Santa Monica Invitational meet which featured Cary Weisiger, a former Duke star Miler with a best time of 3:56.6. I ran well that day and beat Weisiger by more than ten yards. I knew then that my training was paying off.

On July 17, 1966 I had my second opportunity to assess my readiness for a sub-4 minute Mile. I had been invited to the Berkeley Invitational where I learned that Jim Ryun would attempt to break the world record of 3:53.6 set by Frenchman Michel Jazy in 1965. I had competed against Ryun numerous times, defeating him once in May 1964. Two months later, he improved his time and finished third in the U.S. Olympic Trials, which earned him a trip to the Olympics in Tokyo. 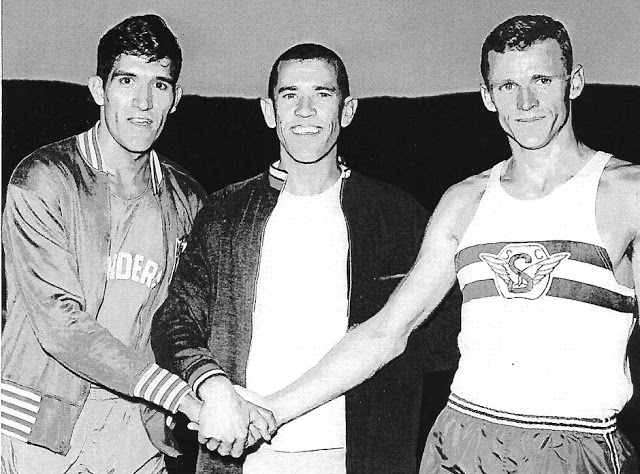 Ricardo Romo (left), after his first sub-4 minute Mile (3:58.8) with Southern California Striders coach Pete Peterson and runner-up Ted Nelson (3:59.4, also his first sub-4), and for both Americans, their only sub-4 Mile.