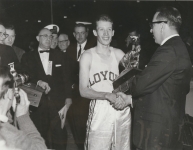 Tom O'Hara is a shy, unassuming fellow whose most outrageous boast is a claim that he weighs 131 pounds. He has broken the world record for the indoor Mile twice this winter, yet he still has the uneasy feeling he is a boy running against men. A shambling redhead with the posture of a consumptive filing clerk, he merely looks like a boy. He is, in fact, the best Miler in the world, with only one real weakness—he doesn't believe it.

Last week in Chicago this lack of self-confidence cost Tom O'Hara at least two seconds in the Bankers Mile—and a chance to run even faster than Peter Snell's world outdoor record time of 3:54.4. Not that O'Hara's race was anything to be ashamed of. With 160 yards to go, he smoothly shifted into a sprinter's stride and ran away from Jim Grelle, his closest rival, finishing in 3:56.4. The time was the fastest ever recorded for an indoor Mile, breaking by .2 second the record O'Hara had set just three weeks earlier in New York. But he could have gone faster and would have, except for the improbable fear that Grelle, no longer in his class, would outkick him in the last lap.

All week long the Chicago Daily News, sponsor of the meet, had been promising its readers a record. So excited had the local citizenry become that the high school basketball tournament, annually the breeziest conversational gambit around the Loop, was upstaged by O'Hara, now known affectionately as Mousemeat to his flock of new fans. Even the mayor himself, Richard J. Daley, had to scrounge for tickets to the meet, which had never sold out before.

Quite obviously O'Hara knew what was expected of him. The pressure was enough to keep a seasoned trouper in an agitated state, not to mention an insecure one, and O'Hara's coach, Jerry Weiland, tried desperately to ease his star runner's state of mind. Facing reporters with the hangdog look of a man who had just invested his life savings in an Edsel agency, he assured everybody that "Tom's a tired boy. All we're after is a win." Then, remembering his obligations as a promoter, he added: "Of course, all his friends and family will be there. He'll give you a good run."

Privately, Weiland thought it quite probable that O'Hara was going to set an indoor record and, more privately still, he was not a bit sure that Snell's outdoor time was safe. But he studiously refrained from expressing his innermost thoughts within earshot of O'Hara, who has a history of reacting to such news with sleepless nights. "Don't even think of records," Weiland told O'Hara. "We've got a whole outdoor season ahead of us."