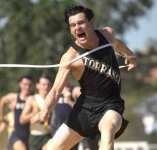 Jack O'Connell, 24, is the British actor who plays Louie Zamperini in Unbroken. The film, directed by Angelina Jolie, will be released on Christmas Day. O'Connell was relatively unknown in the U.S., but his role as the indomitable Zamperini means he won't be obscure for long. Runner's World got him on the phone for a quick conversation about the challenges of portraying an Olympic runner—especially after he'd spent months starving himself.

Runner’s World: Are you a runner?

Jack O’Connell: Yeah, I kind of to and fro a little. I remember Brad Pitt, he once said the job we do is like fight, fight, fight—you train for something for a certain amount of time, you get into condition, and then you have some time off. I’m currently having some time off now, you see. So a lot more walking these days. I’ve cut the pace down a little, but I’ll be back.

RW: Did you have to do anything specific to prepare for the running scenes?

JO: Apparently Louie’s stride was an abnormality of his. His hips would dislocate as he ran, which would enable him an extra couple of inches, I guess, so I wanted to pay attention to that. While training, while working on my stamina, after those sessions, we’d spend a little time literally stretching. I’d have this pretty weighty PT teacher bearing down, stretching me legs, as it were, and that was just to widen my stride some. But no, other than that I think I had a head start just because I used to play a lot of football [soccer] growing up. And, yeah, in between seasons when it was no longer possible to play football I’d be on the track sprinting. So I was more of a sprinter than long distance [runner].