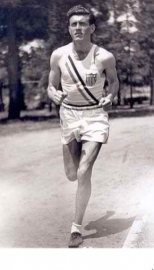 
Louis Zamperini qualified for the 1936 Berlin Olympics at the age of 19. He was the Olympic Trials co-champion at 5000 meters when he tied with then world record holder Don Lash. Zamperini went on to finish 8th at the 1936 Olympic Games 5000m in 14:46.8 with a sub-60 second final lap.

Zamperini's success on the track began in high school when he set a ratified U.S. high school Mile record of 4:21.2 on May 19, 1934, winning the Southern California Track & Field Championship at the Los Angeles Memorial Coliseum; his HS Mile record lasted 19 years!

In 1938, Zamperini also set a national collegiate Mile record (4:08.3), which held up for fifteen years, earning him the nickname "Torrance Tornado". Louis was a two-time NCAA Mile champion at the University of Southern California (1938-39) and he also led USC to two NCAA Outdoor team titles in 1938-39.

Laura Hillenbrand's #1 best-selling book "Unbroken" (2010) tells the inspiring, unbelievable story of his life, his 47-day survival at sea after being shot down in the Pacific in 1943, and his horrific treatment in a Japanese POW camp during World War II. The big screen version of "Unbroken" was directed by Oscar-winning actress Angelina Jolie and opened nationwide to large crowds on Christmas Day 2014 and also received two Oscar nominations (cinematography and sound editing). After the war, Zamperini became a social worker and a popular inspirational speaker.

The follow-up movie "Unbroken: Path to Redemption" was released on September 14, 2018.

On July 2, 2014, Olympian and true American hero Louis Zamperini passed away at age 97 in Los Angeles.

FUN FACT II: Louie was awarded three Purple Hearts, a Distinguished Flying Cross and a Prisoner of War Medal for his WWII service.

Returning was champion Charles Fenske of Wisconsin, but...

By Jon Earnest, The Exponent

Former Reedley resident Bob Seaman and Louis Zamperini, the inspiration for “Unbroken,” always will be linked in the sport of track &...

8 Things You May Not Know About Louis Zamperini

On December 25, Universal Pictures’ new film “Unbroken” is set to debut nationwide. Based upon the bestselling book by Laura Hillenbrand, the film...

Jack O'Connell, 24, is the British actor who plays Louie Zamperini in Unbroken. The film, directed by Angelina Jolie, will be released on Christmas...

It is only in retrospect that the unconnected events of a life...

Eulogy for Louis Zamperini written by Laura Hillenbrand, the author of...

Louis Zamperini, a 1936 U.S. Olympian at 5000 meters and the subject of the best-selling book Unbroken, has died at...

Angelina Jolie’s ‘Unbroken’ hero was her neighbor all along

Zamperini's inspirational story offers a bright light of hope for an often-troubled time.

Angelina Jolie was looking far and wide for dramatic inspiration, and all the time it was right outside her own front door.

Jolie is directing "Unbroken," the...

In keeping with the current sense of nationalistic spirit Team USA has been tapping within many by way of Sochi, a first-look preview of Angelina...

With the leading man and a release date announced Wednesday, the long-awaited film "Unbroken" about Torrance icon Louis...

Encompassing the sweep of the 1936 Berlin Olympics, 47 days adrift in the Pacific evading sharks and the jarring brutality of two years in a Japanese POW camp, it's a story that plumbs the depths of one man's...

It was the spring of 1944, the height of World War II. In a Japanese torture camp, a captured American stood, ravaged by illness and shockingly emaciated, surrounded...

HOLLYWOOD HILLS, Calif. -- I have interviewed some extraordinary people in my more than 43 years as a...

Pete Carroll is back in town and onstage. He's sitting beside Lou...

Louis Zamperini on the Tonight Show with Jay Leno

Louis Zamperini, 95, was recently featured on NBC's Tonight Show with Jay Leno, sitting next to actor & director Catherine Zeta-Jones. Louis discusses his experience growing up in Los Angeles as a "rotten kid", the 1936 Olympics and rooming with Jesse Owens, and his incredible story during WWII...

'King of the Mile' Glenn Cunningham was a real hero of mine... he did the impossible. He was burnt as a child from his arms to his legs to his feet to his back and the doctors said he would never walk again.

Not Yet Ready for His Last Mile

''I don't consider myself a hero, but more of a grateful survivor.''

In June 1944, Anthony & Louise Zamperini were at their home in Torrance, Calif., when they received the following message regarding their son, an airman who at age 19 had been a member of the...