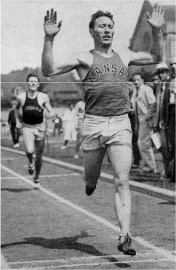 In addition, Cunningham won the prestigious indoor Wanamaker Mile six times and was selected the best athlete in the 100-year history of Madison Square Garden.

FUN FACT: Glenn and his wife Ruth created and ran the Glenn Cunningham Youth Ranch that helped upwards of 9,000 troubled and underprivileged youth over a 30-year period from the late 1940s to the 1970s.

In the 1930s, when American sports fans desperately needed something to cheer about, Glenn...

By Beccy Tanner, The Wichita Eagle

The anniversary of one of the most famous fires in Kansas is approaching.

On the morning of Feb. 9, 1917, Glenn Cunningham, his brother, Floyd, and two other siblings walked...

UTICA, N.Y. – The National Distance Running Hall of Fame announced the eleventh class of inductees to be honored in July in Utica New York. The class of 2012 is comprised of Glenn Cunningham, Horace...

LAWRENCE, Kan. – Eight of the nation’s top milers have agreed to race in the prestigious Glenn Cunningham Mile at the 2012 Kansas Relays it was announced by KU...

It was another bitterly cold morning in Everetts, Kansas, a rural farming town like so many hundreds of communities throughout the...