Roger Bannister: Tribute to a Titan

By Ryan Lamppa, Bring Back the Mile founder

We knew this day would come: the death of a great man – a universally enduring, esteemed and endearing legend in every sense of the word as worldwide homage, news stories and social media trending attest. On Saturday, March 3, 2018, surrounded by family in Oxford, England, Roger Bannister, the first man to break 4 minutes in the Mile, passed away at 88.

On Thursday, May 6, 1954 at famed Oxford University’s Iffley Road track, Bannister cemented his name and the Mile’s place in history with the first sub-4 minute Mile – a time many experts thought an impossible if not a deadly barrier to break, and to this day, Bannister’s iconic mark is the watershed moment for the Mile. As a result, this still resonating milestone is often cited as an example of high human achievement and “sub-4” also became part of our lexicon as the most coveted, recognized and lauded standard in and of the sport.

Still recovering from the economic, physical and psychological devastation of World War II, the quest for the magical first sub-4 minute Mile and Bannister’s 3:59.4 was just the tonic that Great Britain needed.

In November 2005, Forbes magazine and a panel of experts selected his historic clocking the Greatest Athletic Achievement of the past 150 years! The Briton was also the inaugural recipient of the Sports Illustrated Sportsman of the Year award for 1954.

The continued media and other mentions of Roger Bannister’s forever etched first sub-4 and the sub-4 benchmark were one reason why we launched Bring Back the Mile in January 2012.

The 1952 Olympian set the standard as an athlete and a true renaissance man. Bannister believed that a man (or woman) should and could be more than his athletic achievements, and he embodied that credo as post-first sub-4, he became an author, ambassador, administrator, famed neurologist and devoted family man. In 1975, Queen Elizabeth knighted Sir Roger Bannister for his contributions as a runner and physician.

Roger Bannister, of course, will be long remembered, feted and honored as the first man to break 4 minutes for the Mile, and rightly so, but he was so much more than that historic, still revered supreme singular human achievement. Bannister, who embraced and lived the Greek ideal of a healthy mind and a healthy body, truly transcended the sport.

Put simply, he represents an athletic, cultural, medical and global treasure. We salute and celebrate the life & times of Roger Bannister. Here’s to the man who made the mile, The Mile, and more. Raise your glass. Hear, hear! 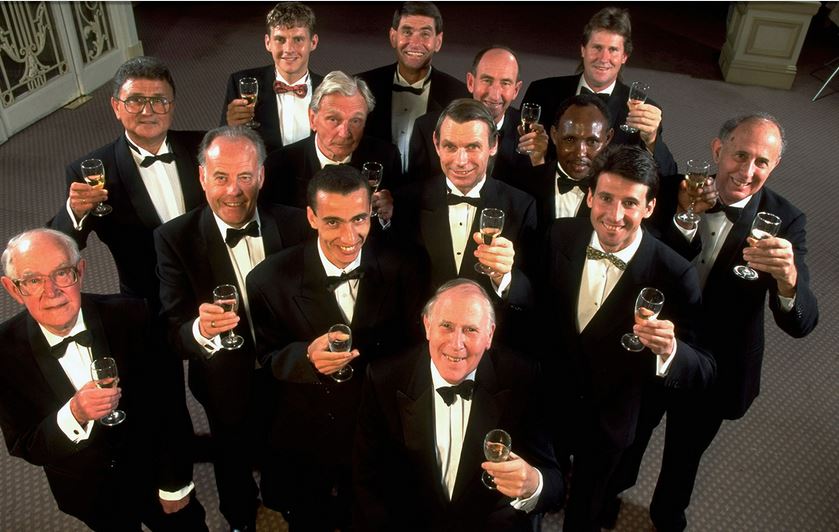 His BBTM bio HERE includes an extensive newsfeed dating back to 1954. Excellent 2-plus minute summary video below, including post-race comments by Bannister.