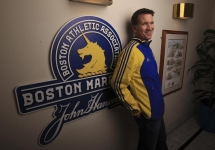 The purpose of the BAA high-performance elite team is to dig in and focus on creating a national-caliber and, hopefully, a world class-caliber team that lives and trains in the Boston area.

One of the most important factors that came into my decision to take on this new coaching role with the BAA was the Marathon bombings in April. It was an event that shook up every runner I know. I hope that we as a team can be a part of the healing process as we look to set up a foundation for years to come. It will be a foundation more than just of brick and mortar, but one of the human spirit.

I’m open to working with any athlete, male or female, from the 800 [meter] up toward the Marathon. If we have the opportunity to bring in a kid who’s a phenomenal 800 runner or a great steeplechaser, we’re not going to say “No” because he or she runs a specific event that doesn’t necessarily lead toward the Marathon.

With Boston, you don’t have altitude, but you have phenomenal places to run. You’ve got a very good infrastructure in terms of all the indoor and outdoor tracks and medical facilities and a phenomenal running community that’s hugely supportive of its own. Probably the biggest negative is dealing with the winter.