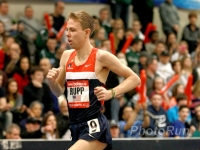 "A competitive Mile race would be the best preparation for the USA & World Indoor Championships."

BOSTON — Galen Rupp, the 2012 Olympic silver medalist at 10,000 meters and seven-time USA champion who holds four U.S. records, is a late addition to the Mile at the New Balance Indoor Grand Prix organizers have announced.

“I am excited to run the Mile in Boston on Saturday,” said Rupp. “It will be my third time to run in Boston this year. After my American Indoor Records in the 5000 meters and 2 Miles my coach, Alberto Salazar, and I decided that a competitive Mile race would be the best preparation for the USA Indoor Championships in Albuquerque on Feb. 22 and the IAAF World Indoor Track & Field Championships in Poland on March 7.”

Rupp and Lomong ran the two fastest indoor Miles in the world last year: Rupp at Boston University (3:50.92) and Lomong in winning the NYRR Wanamaker Mile at the Millrose Games (3:51.21)

Withdrawing from the Mile is Matthew Centrowitz.

The New Balance Indoor Grand Prix, which has played host to six World records and 10 U.S. records in its first 18 years, is the first stop in the 2014 Indoor USATF Championship Series.