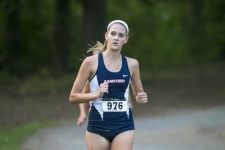 "When I came to Samford, I didn't necessarily come for track. I picked the school that was going to be best for me."

Nelson, from Brewton, Ala., pulled away from her competitors to win with a finishing time of 4:31.24, a personal record.

She came into the championship race with the best time amongst the 16 finalists who advanced from the preliminaries, then made a late push in the run after settling into the second group of racers for the first laps.

Nelson was the 12th seed in the final run, and beat out New Hampshire's Elinor Purrier down the final straight; Purrier's time was 4:31.88, with Penn State's Danae Rivers finishing in third at 4:33.89 and defending champ Kaela Edwards finishing fourth.

Nelson helped lead the Samford team to a Southern Conference indoor title and finished ranked #21 in the country after the meet. The Bulldogs begin their outdoor season in May.

"I'm really glad I could do that for them," Nelson said of giving Samford its first national championship in any sport.

For the Bulldogs, the signature win was a big deal.