Sebastian Coe: Man of Many Talents 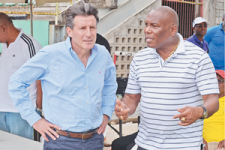 England’s Sebastian Coe has a long and distinguished career. First as an Olympian and former record breaking middle distance runner; a parliamentarian and now as a sports administrator. Lord Coe as he’s known in some circles, won four Olympic medals, established eight outdoor and three indoor world records including three Mile world records, and featured in a fierce middle distance rivalry in the early to mid-80s with fellow Britons Steve Cram and Steve Ovett.

As the world record holder he was favorite to win 800 meter gold at the 1980 Moscow Olympics but finished with a silver behind rival Ovett. Coe made amends when he copped gold in the 1500 meters event a few day later, relegating Ovett to the bronze medal. Four years later in Los Angeles, he was again denied gold in the 800m when Brazil’s Joaquim Cruz clocked 1 minute, 43 seconds to the Briton’s 1:43:64.

Coe was not expected to successfully defend his 1500m title as Cram was installed as the favorite. However, he showed just why he was the uncrowned king of middle distance running when he upstaged his countryman to clinch the crown and become the only man to have won Olympic 1500m gold twice.

Life after track & field for Coe has been equally impressive.